eSports, the next Premier League? 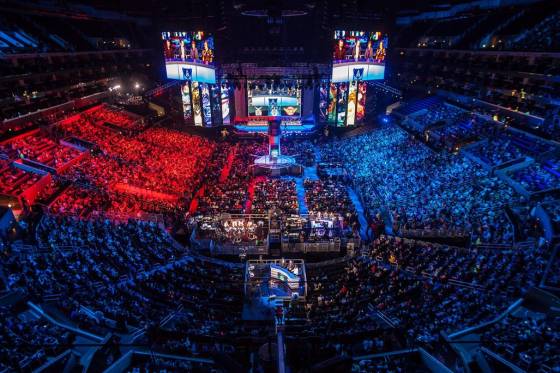 Over the summer whilst eagerly following the football transfer news I was disappointed to see that Manchester City had signed another new player. As a Manchester United fan watching Pep Guardiola’s football revolution at the “noisy neighbours” was not a pleasant experience, and as such when I opened up the webpage to see who City had signed, I was surprised to see that it was not the next superstar in the making that they had signed, rather it was a professional Fifa player Kieran ‘Kez’ Brown. Kieran is an eSports player.

eSports is currently a $500 million industry, according to Deloitte, with over 150 million fans and viewers. Fans enjoy watching professionals play and compete in video games, either online or live in packed out stadiums.

Whilst I was aware that professional eSports players were certainly becoming more common, I had thought that was mainly localised to countries such as South Korea and the US, rather than in Europe and the United Kingdom. However on closer inspection I realised that Manchester City weren’t even the first Premier League team to sign a professional Fifa player that summer, West Ham had actually beat them to it, signing Sean Allen, also known as Dragonn, in May.

This made me begin to think about why these large sports teams were sponsoring eSports players, what sort of messages they were trying to get across by engaging with the eSports fanbase, and whether we will see more of this in the future.

The size of the eSports industry means it is perhaps not that surprising that professional football clubs have realised that sponsoring eSports stars is potentially a good way of engaging with fans. However, in some ways both Manchester City and West Ham have been spectacularly unambitious in sponsoring professional Fifa players.

Fifa is certainly a popular game, but most of the people who buy it and would watch professional gamers play it online would already be football fans. They would be unlikely to change the football team they supported due to the affiliation that an eSports player might have with a club. As well as this, the professional Fifa community is small and draws in a paltry amount of viewers compared to other eSports, such as Dota 2, League of Legends or the recent Blizzard release, Overwatch. Whilst the winner of the Fifa World Cup won around $20,000 in prize money, the winner of the Dota 2 International Tournament could expect to receive around $9 million. Nevertheless the ambition of Manchester City and West Ham to find new and inventive ways to communicate with current and potential fans should be applauded.

In fact the prospect of gaining potential fans or indeed consumers from sponsorship deals must undoubtedly be a major reason for why both professional sports teams and big MNC’s are getting involved with eSports. In particular the demographics of the eSports community make sponsoring eSports teams and players very desirable for advertisers: according to the BBC around 75% of the fanbase are aged between the ages of 18-24, and 82% are male. They also appear to be typically not listening to traditional television or radio, according to Philadelphia 76ers chief Scott O’Neil, following the 76ers purchase of eSports teams, Dignitas and Apex in September 2016.

Given the unique demographic situation at play within the eSports industry it is understandable why brands clearly see sponsorship deals within eSports as a way to promote their brand and increase brand recognition, as shown by Coke, Nissan, Logitech and Red Bull all becoming tournament sponsors. If O’Neil is right in saying that the typical eSports fan is not really engaged with traditional television and radio, it would not come as any surprise if in the future advertisers, and large companies wishing to get their brand promoted, targeted the eSports community more often and to a larger extent.

Going back to the original question, why eSports was being targeted, the potential growth of the fanbase should also be examined. As mentioned above, the demographics of the fanbase make sponsorship deals attractive, but another major aspect of the willingness for companies to engage with the eSports audience must be the growth that eSports as a whole is expected to undergo in the future.

eSports fans in the US, at least according to the BBC, spend on average of $1 a year on fan activities, compared to the $77 a year that the average American sports fan spends. This vast potential for growth means that many companies are seeing eSports as a way to potentially achieve major increases of sales in eSports related items, which would mean that sponsorship deals negotiated now could end up having a massive global reach in the future.

Whilst I am not sure that eSports will ever reach a similar size to the Premier League, it is not inconceivable that it could eventually reach a similar audience size to sports such as rugby or tennis, and as such I think we will see many more advertisers and companies targeting eSports in order to increase brand awareness or sell a product. Who knows, having lost out on sponsoring the Premier League, perhaps we will see the Barclays Dota 2 International Tournament in the future.

Ben joined Sermelo in October 2016 having graduated from the University of Exeter in History and Ancient History that same year. Ben’s history degree has given him an appreciation of the many difficulties that can be associated with communication, as well as developing his analytical and research skills.
Ben has previously undertaken work experience within a variety of different industries and sectors, including stockbroking and commercial law.
Outside of work, Ben has a keen interest in sport, being a passionate Manchester United fan, and a keen follower of cricket, rugby, tennis and Formula 1.