Home > News & Insights > Pride and Social Activism - the next backlash for brands to consider?

Pride and Social Activism - the next backlash for brands to consider?

June marks Gay Pride month, celebrated in many countries across the world. Whilst the first thing that many will think of are the various marches that will take place across major cities, brands and corporations too will also be keen to publicise their Pride credentials this month.

Some brands will make efforts to physically change their products to celebrate the month. Others may make less effort, changing their logo to a rainbow theme and thinking ‘job-done’.

There is an inherent risk with ‘jumping on the band wagon. In 2019 brands must communicate values that are reflected in their day-to-day actions. Rather like the rise of the term ‘green washing’, where it’s no longer acceptable to discuss sustainability once a year in a CSR report, these values have to be visibly demonstrated in everyday activity.

As brands continue to engage with events like Pride, they must do so in the right way.  Filtering a brand logo in rainbow colours isn’t enough and the risk of a backlash from consumers will grow – particularly if companies are perceived to be engaging with such events purely to improve profitability. This backlash could come in two forms.

Firstly, some consumers are likely to stop purchasing or otherwise engaging with those brands in protest at their involvement with “progressive” causes. Unsurprisingly, this reaction will often align with the “culture wars” affecting much of the Western world.

The second form of backlash has greater reputational consequences.

The phenomenon of the “citizen journalist” has been understood by many communicators and businesses for some time now. In 2019 however, “citizen journalists” have been replaced by “citizen activists”. The ability for any consumer, or group of consumers, to pick up a phone and create a viral campaign on Twitter, Facebook, Reddit etc., is unparalleled. Many crisis management trainings will certainly have included a potential activist campaign beginning on social media as one scenario, underlying the risks that such campaigns can pose.

When engaging with events like Pride, it is important that consumer facing brands in particular understand social media in its varied forms. A cursory look on Twitter, Facebook, and particularly Reddit will show plenty of examples of consumers creating images (or memes) highlighting what they see as cynicism from brands trying to present their Pride credentials. 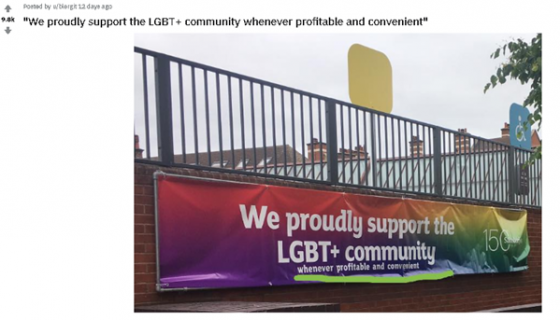 The above meme, arguing that Sainsbury’s only supported LGBT+ rights when convenient, is far from unique in suggesting that many corporations are only now beginning to back events like Pride when it is easy to do so, and importantly, when there is money to be made. 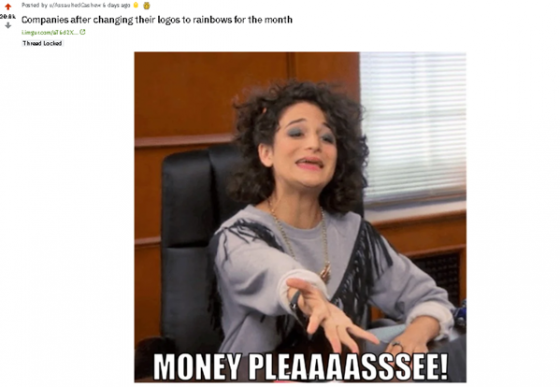 This cynicism towards businesses should act as a warning when planning campaigns to engage with events such as Pride. The lesson is clear - trying to hijack positive feeling to a previously marginalised community for commercial benefit, without having visibly taken concrete steps to support that community in the past (when it might not have been easy!) could result in a public relations backlash.

For businesses wrestling with this potential issue, it is important that a good understanding of social media and the current political/social climate is present. The activist nature of many consumers means that businesses need to be careful of how they engage with events such as Pride, offering support through concrete actions, without necessarily being explicit about driving engaged consumers to purchase products or services. It should be taken as read that the planning stages of such campaigns include individuals who understand not only basic social media – Twitter, LinkedIn and Facebook – but also understand platforms such as Reddit, which often acts as a bellwether for changes in public opinion, and that plans are created to appropriately respond to any backlash that may occur.

As the influence of sites such as Reddit continues to grow, communicators and businesses will no longer be able to remain blind to their potential impact on consumers, particularly when engaging around emotive social issues like Pride. Hopefully, not being able to answer the question “Do you know what a meme is?” will one day seem as ridiculous as not understanding a hashtag in 2019.

Ben is a project lead on some of Sermelo’s large international clients. Since joining Sermelo in 2016, he has supported clients to help them achieve their communications objectives with a particular focus on copywriting, media relations, internal communications, social media support and account management.

Ben has a degree in History and Ancient History from the University of Exeter. Outside of work, he is interested in football, cricket, tennis, and is also a keen reader.